Climate Purge in Paris in Advance of COP 21

Now, where did they store those guillotines? 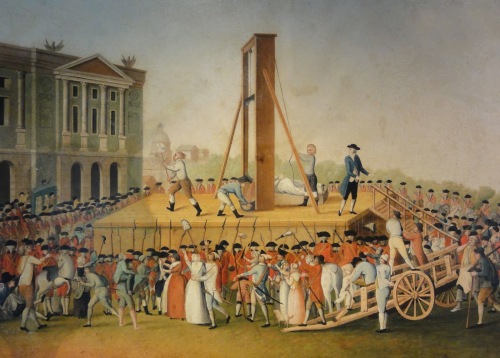 Philippe Verdier is a veteran meteorologist with a Masters in sustainable development. He has been bringing weather news to France for years on the television channel France 2. He has impeccable credentials (very important in France), and has covered previous COP gatherings in Bali, Copenhagen and Cancun. He has been actively studying climate change since 1997.

And he just got yanked off the air. The reason? He has written a book called ‘Climate Investigation‘ where he claims “that leading climatologists and political leaders have “taken the world hostage” with misleading data. He now calls himself the ‘Snowden’ of climate change. I hope that doesn’t mean he has to move to Russia…

In a promotional video for the book, Mr Verdier said: “Every night I address five million French people to talk to you about the wind, the clouds and the sun. And yet there is something important, very important that I haven’t been able to tell you, because it’s neither the time nor the place to do so.”

He added: “We are hostage to a planetary scandal over climate change – a war machine whose aim is to keep us in fear.”

For this scandalous utterance the former French Minister of Ecology, Natalie Kosciusko Morizet, called him and other skeptics ‘assholes.’ On national television. I guess when you’re hosting 40,000 of the Climate Elect you want to keep the story simple, if not straight.

Verdier is not a kook, not an extremist. His doctoral thesis is about the role of media in the current debate on climate change. He sounds very much like a Lukewarmer, and his book sounds similar to some of what I have written in my recently published book, ‘The Lukewarmer’s Way–Climate Change For The Rest Of Us.‘

Verdier said “said he decided to write the book in June 2014 when Laurent Fabius, the French foreign minister, summoned the country’s main weather presenters and urged them to mention “climate chaos” in their forecasts.

“I was horrified by this discourse,” Mr Verdier told Les Inrockuptibles magazine. Eight days later, Mr Fabius appeared on the front cover of a magazine posing as a weatherman above the headline: “500 days to save the planet.”

Mr Verdier said: “If a minister decides he is Mr Weatherman, then Mr Weatherman can also express himself on the subject in a lucid manner.

“What’s shameful is this pressure placed on us to say that if we don’t hurry, it’ll be the apocalypse,” he added, saying that “climate diplomacy” means leaders are seeking to force changes to suit their own political timetables.“”

Shameful, yes. But certainly not limited to France.