Initiatives to address global emissions in an effort to combat ‘unwanted’ climate change have been largely unsuccessful. Emissions continue to increase, despite last year’s plateau in global CO2. Nobody expects a repeat of 2014 this year, in part due to the construction of hundreds of coal plants in Asia, increased use of coal in Germany and the gentle decline of nuclear provision in Western countries and Japan.

One reason initiatives have not been successful is a focus on supply rather than demand. This is natural, as supply is focused on what we can do, whereas demand is a more difficult question, based on what we both need and want.

It’s great to trumpet the coming online of wind generation and large solar arrays and I don’t want to belittle the achievements involved, even if I consider them proof of concept rather than solutions.

It is also much more predictable. Energy consumption for countries that have more recently joined the elect club of developed countries could be overlaid on each other to create almost a single line, just using different starting dates to match the beginning of the modernization process.

Starting about 1900, energy consumption in the U.S. started an inexorable and dramatic rise, unchecked by World War 1 or 2, the Spanish Flu or the Great Depression. It didn’t stop until the 1974 Oil Crisis, which I think is just a coincidence. 1974 was the year that saw a plateau because that’s when American development had reached a peak. I put the subsequent fall in consumption down to the Oil Crisis, but that’s a different story.

China’s about three quarters up that curve. 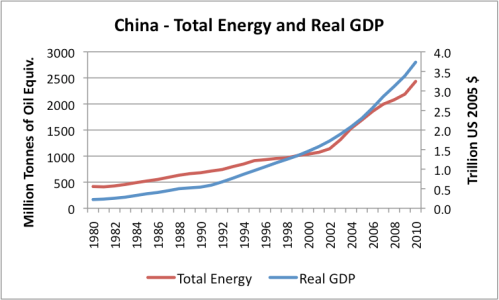 Brazil about one quarter. India’s just getting started. But like Turkey, Mexico and every other recently developed country, they are fated to follow the same energy consumption curve. As the citizens of a country start to get richer they use their new-found wealth to make their lives better. Appliances, vehicles and air conditioning are high on the shopping list.

They don’t have to reach the same level as America to hit a plateau–Americans use about 310 million btus per person per year, but Germans have a pretty nice standard of living at 250 mbtus per capita and Denmark does very well with about 160 mbtus per capita. But geography and weather have a big influence on this–large distances (China and India) and hot weather (India and Indonesia) tend to push the totals up.

As I explain in my book and at my companion blog, 3000 Quads, rapid development makes it quite likely that in 2075 about 8 of the 9 billion plus people on this planet will be consuming somewhere between the modest Danish and exuberant American totals per person per year. Energy consumption may rise to 3000 quadrillion BTUs per year, six times the level of 2010. (My prediction is an outlier–the EIA and the IEA think energy consumption will be much lower. The difference is entirely due to what will happen in the developing world. Those two august bodies think energy consumption will grow by 2.4% annually in the developing world. I think it will grow at 4.19% each year.)

What does this mean for climate policy? It should be obvious, but apparently is not.

Coordinating our fuel substitution efforts should not be a national endeavor. It makes no sense for California to replace a million BTUs generated by natural gas with the same amount generated by solar. The savings in emissions isn’t sufficient (at first). To balance our fuel portfolio while meeting the rising demand we should focus on the bottom of the energy ladder.

We absolutely must eliminate the use of fire and dung as fuels. They are the dirtiest, most injurious and most emissive, and we shouldn’t care overly much about what replaces them. That includes coal, although of course we should celebrate when we can use gas, nuclear or renewables instead.

Then we can turn our attention to coal. And quickly–coal is far better than dung or firewood, but that’s damning with faint praise. When coal is no longer used as a primary source of fuel we can then look at oil and natural gas, which ought to be getting scarce and expensive by then. And when that is done and most of the world is powered by nuclear, hydro and renewables, our job will be done.

So that $100 billion per year being bandied around as the amount the developed world should give to the developing world to deal with climate change could be paid in kind, not cash. California could build facilities to generate power from natural gas, hydro, renewables or geothermal in the developing world, helping to eradicate the bottom rungs of the energy ladder. It would be far more useful than getting a little cleaner in California–which amounts to a vanity purchase to stroke the egos of those in the Golden State. They’re clean enough for now.

Looking at where demand for energy is rising and configuring the world’s fuel portfolio to get the biggest reduction in CO2 emissions for our buck is something that does not appear to be rocket science. One wonders why it is not on the various agendas of the climate great and good.